A series of science papers, summarized below with key figures, present different applications of the dataset. 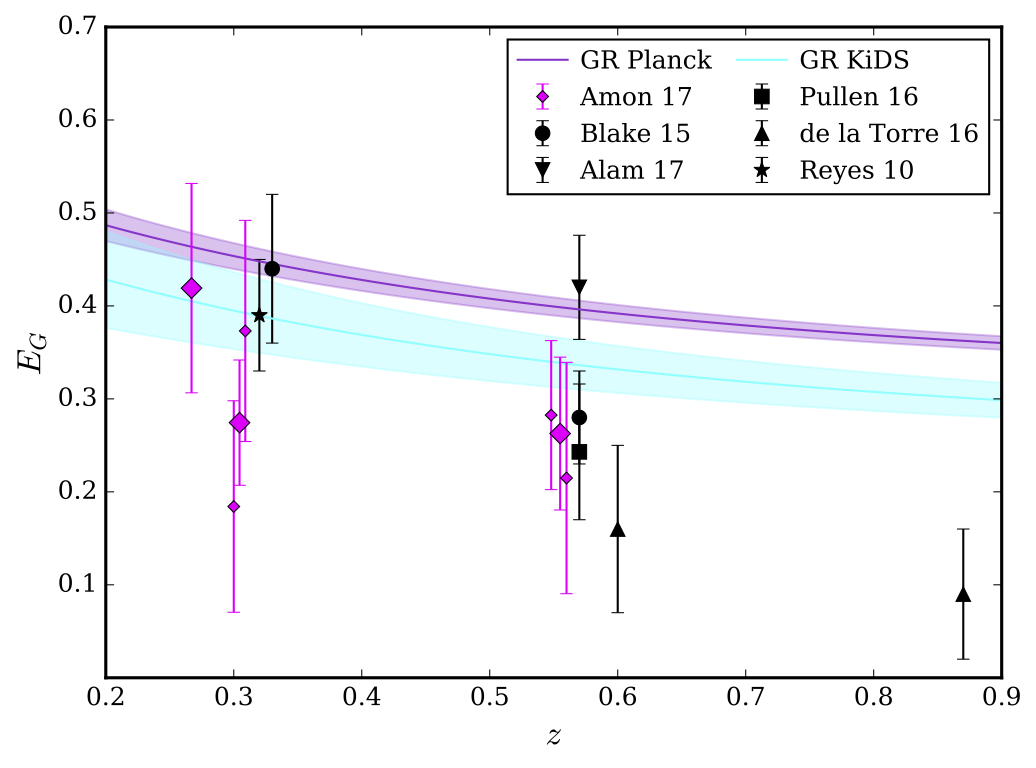 In Amon et al. (2018) we measured the gravitational slip, EG, using overlapping data from KiDS-450, 2dFLenS, BOSS and GAMA. The gravitational slip is a summary statistic for a set of lenses which is sensitive to the matter density Ωm and gravitational physics, but insensitive to the clustering amplitude σ8 and lens galaxy bias. It is created by combining galaxy-galaxy lensing, galaxy clustering and redshift-space distortion measurements for the lenses, and takes on the value EG = Ωm/f in General Relativity. 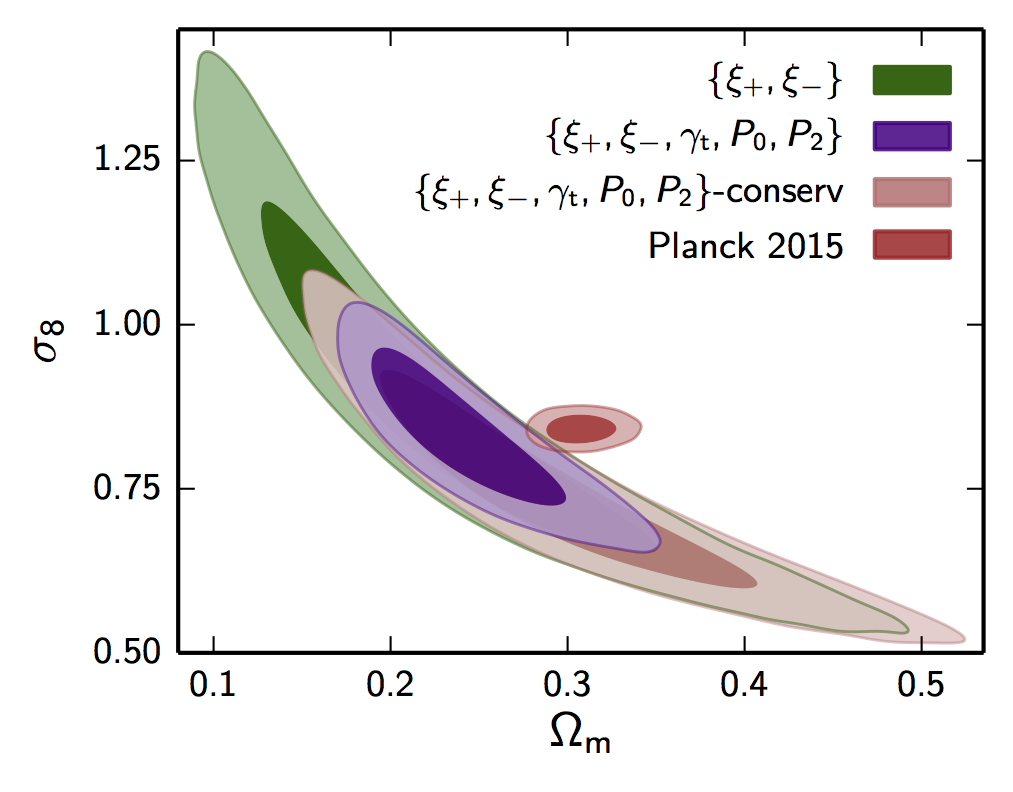 The addition of the galaxy-galaxy lensing measurements to the cosmic shear data significantly improves the constraint on the intrinsic alignment amplitude, and the inclusion of the full large-scale structure statistics tightens cosmological constraints along the lensing degeneracy direction. The fully combined constraint, S8 = σ8 sqrt(Ωm/0.3) = 0.742 +/- 0.035, corresponds to a 2.6-σ discordance with Planck CMB observations. The complementarity of our observables allows for constraints on modified gravity degrees of freedom that are not simultaneously bounded with either probe alone. 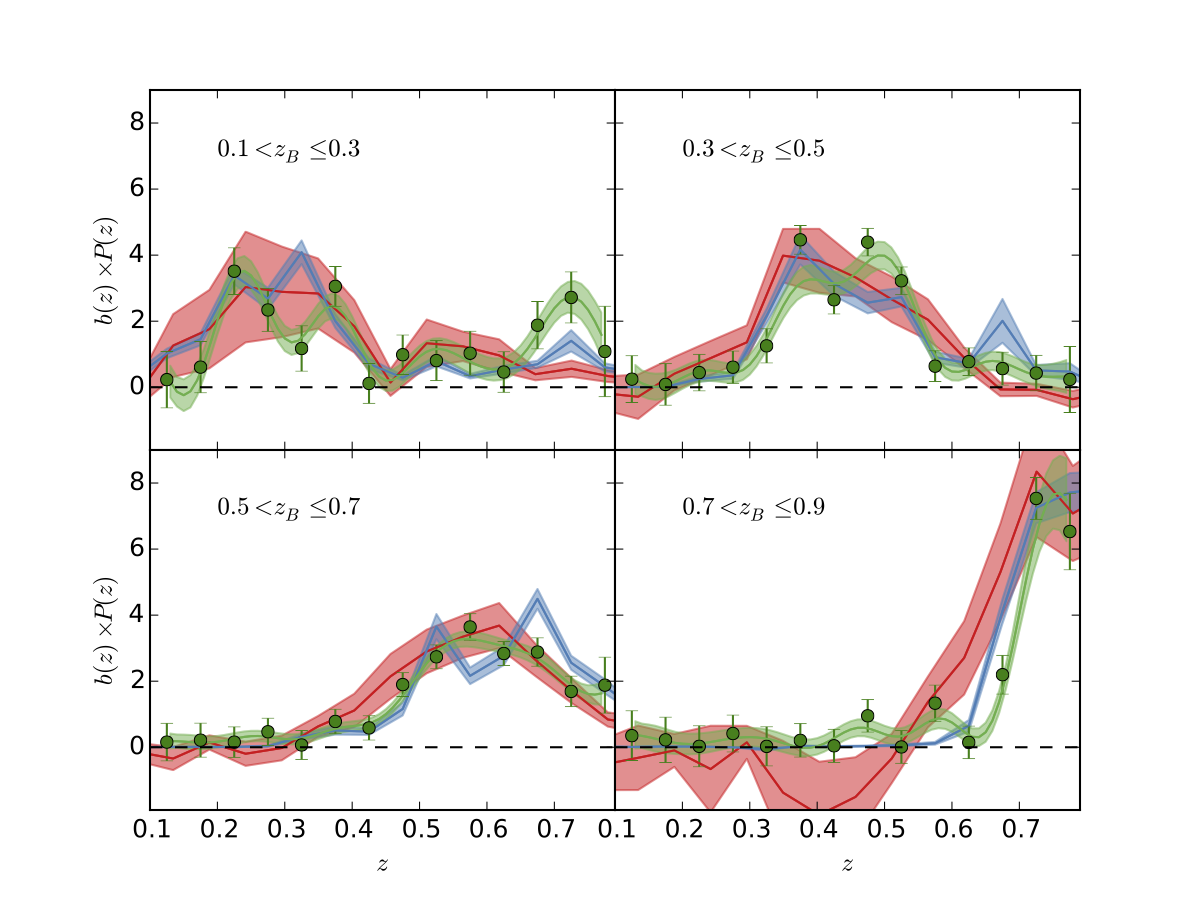 In Johnson et al. (2017) we developed a statistical quadratic estimator to infer the redshift probability distribution of a photometric sample of galaxies from its angular cross-correlation in redshift bins with an overlapping spectroscopic sample, extending and modifying the methodology presented by McQuinn & White (2013). The derived source redshift distribution is degenerate with the source galaxy bias, which must be constrained via additional assumptions.

We applied this estimator to constrain source galaxy redshift distributions in the Kilo-Degree imaging survey through cross-correlation with 2dFLenS. Our results for four tomographic bins are shown in the left-hand plot, as a binned step-wise distribution in the range z < 0.8 (green data points) and a continuous distribution using a Gaussian process model (green band). These results are compared with alternative determinations by methods using small-scale cross-correlation (red bands) and weighted direct calibration (blue bands). 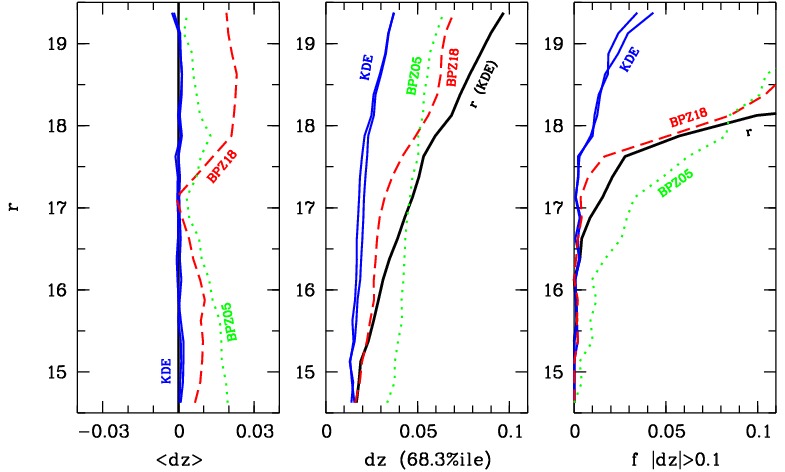 In Wolf et al. (2017) we presented a new training set for estimating empirical photometric redshifts of galaxies, which is randomly selected and nearly complete at r<19.5. We investigated the photo-z performance obtained with ugriz photometry from VST-ATLAS and W1/W2 from WISE, based on several empirical and template methods.

The best redshift errors are obtained with kernel-density estimation (KDE), as are the lowest biases, which are consistent with zero within statistical noise. The 68th percentiles of the redshift scatter for magnitude-limited samples at r<(15.5, 17.5, 19.5) are (0.014, 0.017, 0.028). In this magnitude range, there are no known ambiguities in the colour-redshift map, consistent with a small rate of redshift outliers. In the fainter regime, the KDE method produces p(z) estimates per galaxy that represent unbiased and accurate redshift frequency expectations.

The inset plot shows the mean redshift bias, half-width of redshift deviation and outlier fraction vs. r-band magnitude for the KDE method compared to the BPZ template method (with different values for the zero-point uncertainty). Please see the paper for more details. 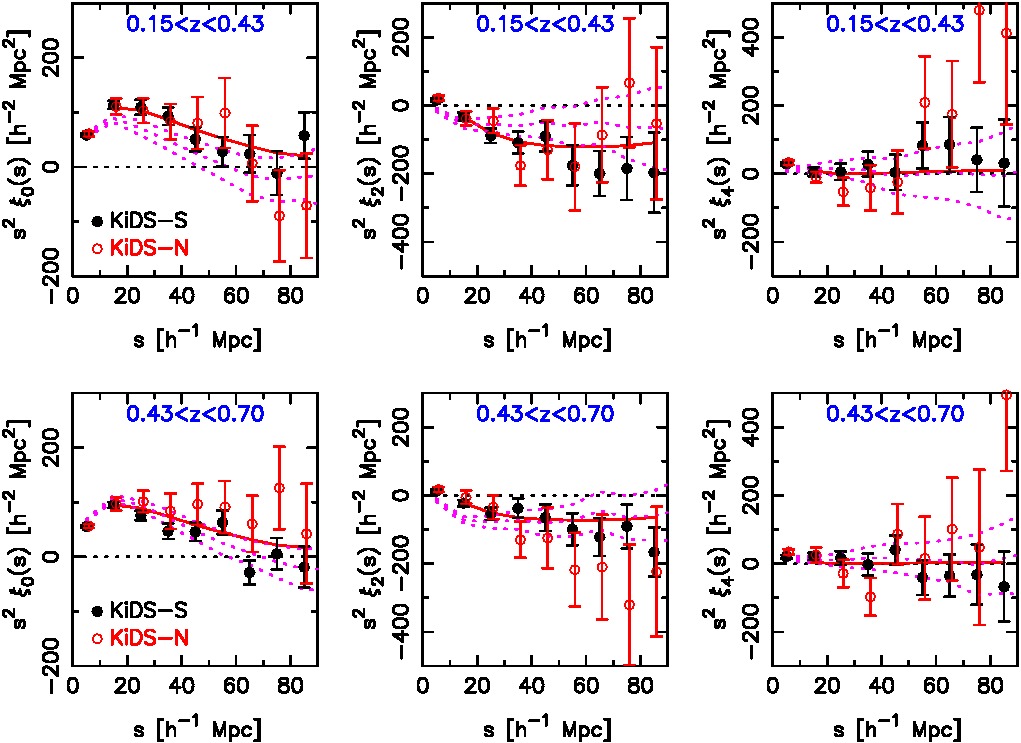 Our survey paper (Blake et al. 2016) presented measurements of the clustering pattern of 2dFLenS LRGs using a variety of statistics.

The left-hand figure shows our determination of correlation function multipoles (monopole, quadrupole, hexadecapole) as a function of scale, separately analyzing our observations in the KiDS-South and KiDS-North regions, in two redshift ranges 0.15 < z < 0.43 and 0.43 < z < 0.7. The signature of redshift-space distortion is clearly detected, and is comparable to the range found in mock catalogues (magenta dotted lines). Similar results are found for power spectrum multipoles.

A wide set of cosmological observations suggests that the dynamics of the Universe are currently dominated by some form of "dark energy", which in standard FRW models is propelling an acceleration in late-time cosmic expansion. However, the physical nature of dark energy is not yet understood.

Efforts in this area to date have focussed on mapping out the cosmic expansion history using baryon acoustic oscillations (BAOs) as a standard ruler and Type Ia supernovae as standard candles. These probes have yielded important constraints on the "homogeneous expanding Universe", including 1% distance measurements and a 5% determination of the value of the equation-of-state of dark energy. However, measurements of the laws of gravity that describe the "clumpy Universe" are currently less advanced, and only a combination of complementary observations of expansion and gravitational growth will discriminate between the different possible physical manifestations of dark energy.

There are two particularly important observable signatures of gravitational physics that can be used for this purpose, and these two methods gain considerable leverage when combined. The first observable is the peculiar motions of galaxies as they fall toward overdense regions as non-relativistic test particles. These motions produce correlated Doppler shifts in galaxy redshifts that create an overall clustering anisotropy as a function of the angle to the line-of-sight, known as redshift-space distortion (RSD). This pattern has been measured by a number of galaxy redshift surveys and has permitted the growth rate of cosmic structure to be measured with 10% accuracy at some epochs. The second gravitational probe is the patterns of weak lensing imprinted by the deflections of light rays from distant galaxies as they travel through the intervening large-scale structure as relativistic test particles. This signal may be measured using correlations in the apparent shapes of background galaxies in deep imaging surveys.

Velocities and lensing are complementary because their combination allows general deviations to the Einstein field equations to be constrained. Modern theories of gravity may be classified by the manner in which they warp or perturb the spacetime metric (and the way this warping is generated by matter). In general two types of perturbations are possible: spacelike and timelike. In GR these perturbations are equal and opposite, but in "modified gravity" scenarios a difference is predicted.

Joint cosmological fits to weak gravitational lensing and galaxy redshift-space distortion statistics can be performed using datasets without sky overlap. However, the availablity of overlapping imaging and spectroscopic surveys yields several scientific benefits. First, since the same density fluctuations source both the lensing and galaxy velocity signals, the partially-shared sample variance reduces the uncertainty in the gravity fits, and the addition of the shape-density correlation statistics ("galaxy-galaxy lensing") enables new measurements to be constructed such as the "gravitational slip".

Perhaps more importantly, the actual benefit of overlapping surveys exceeds statistical forecasts because weak lensing measurements are limited by a number of sources of systematic error which may be mitigated using same-sky spectroscopic-redshift observations. One of the most significant systematic errors is the calibration of the source photometric redshifts which are required for cosmic shear tomography. Overlapping spectroscopic surveys are a powerful means of performing this calibration, using approaches including both observation of complete spectroscopic sub-samples and analysis of cross-correlation statistics. Conversely, the gravitational lensing imprint allows independent calibration of the galaxy bias parameters that are a key systematic limitation to redshift-space distortion analysis.

Wide-area overlap between spectroscopic and imaging surveys requires significant further extension to realize its full scientific potential. Two of the deep imaging surveys currently being performed to measure gravitational lensing - the Kilo-Degree Survey (KiDS) and the Dark Energy Survey (DES) - are located largely in the southern hemisphere, whereas the largest existing wide-area spectroscopic surveys have been carried out by the Sloan Telescope in the northern hemisphere. With this in mind, we have created 2dFLenS, a new southern-hemisphere spectroscopic redshift survey.

2dFLenS, in combination with KiDS and DES, will extend the datasets available for testing gravitational physics and promote the development of relevant algorithms for joint imaging and spectroscopic analysis. This includes analyses of galaxy-galaxy lensing, redshift-space distortion, and the overlapping source redshift distribution by cross-correlation and direct photometric-redshift calibration.